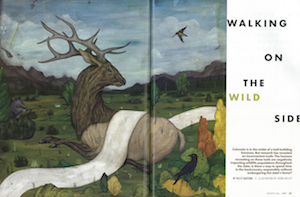 This article was a finalist for a 2014 Maggie Award for Best Profile.

Colorado is in the midst of a trail-building bonanza. But research has revealed an inconvenient truth: The humans recreating on these trails are negatively impacting wildlife populations throughout the state. Is there a way to spend time in the backcountry responsibly without endangering the state’s fauna?

One morning this past August, I pedaled my mountain bike through high-alpine meadows that made everything seem limitless, even me. Specks of crimson, cobalt, purple, and ivory dotted the grasses like marks from a pointillist’s brush, and the small lakes I passed blazed blue along the trail linking the Rabbit Ears rock formation to the Steamboat Springs ski area some 20 miles away. At the last lake on the route, I saw a moose. And it saw me.

I braked to a stop, and my riding buddies halted behind me. Seeing moose around Steamboat isn’t unusual; the animals have taken to lounging on the ski runs and in the aspens separating those trails. But moose are crotchety creatures, as likely to charge humans as to flee from them, so as soon as we noticed this one wading among the reeds at the edge of the pond, we dashed off-trail into the pines to give it space. The 50 feet between us grew to 75, then 100 as we hiked through dense shrubbery that scratched my legs and pulled at my bike.

Once we’d skirted the pond and rejoined the trail to continue our ride, we congratulated ourselves for our wildlife-savvy evasion. Yes, traipsing around off-trail was onerous, but we’d respected the moose’s need for space. Or so we thought.

Colorado appears to be different than the rest of the United States, where people reportedly spend about 90 percent of their lives indoors. Here, residents make a point of getting outside to hike, picnic, ski, run, climb, fish, hunt, mountain bike, or pilot an off-highway vehicle: 69 percent of Coloradans log some form of outdoor recreation one or more times per week. Many of the state’s 84.7 million annual visitors come to do the same. All that recreating contributed $62.5 billion to Colorado’s economy in 2017 (up from $34.5 billion in 2013). Colorado’s population has also grown; we now number 5.7 million humans, compared to 2.9 million in 1980. To keep pace, we’re adding new trails to our 39,000-mile network. Colorado Parks and Wildlife (CPW) estimates that by 2026, municipalities and state parks will need to build 3,464 more miles of trail to accommodate the state’s hunger for adventure.

That’s a lot of biggering, to quote my daughter’s favorite Dr. Seuss story, The Lorax. And, like that book’s mustachioed title character, scientists are documenting how humans can have unfortunate consequences for nature.

Click here to read the complete article with photography and illustration.