29ers for Short Cyclists, Outside, October 2020 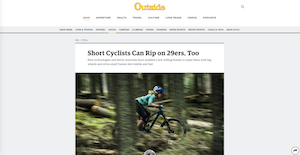 Ten years ago, when I first rode a mountain bike with 29-inch wheels, I hated it. A lot of cyclists were hyping the performance benefits of the larger wheel size. But I’m four foot eleven. The size-small 29er that I tested felt as agile as an aircraft carrier and just as effortful to get moving. Over the next several years, I had scarce opportunities to try competing models, because few 29ers were even made in my size. The prevailing advice was that short cyclists shouldn’t ride 29ers, and I believed it.

Any cyclist who’s under five foot five has probably heard that 29ers aren’t ideal for them. That’s because, for a long time, it was true. When 29-inch wheels began appearing on mountain bikes about 15 years ago, companies attempted to shrink the big-wheeled formula into frame sizes that were small enough to fit sub-five-foot-five riders (many of whom were women—the “average” American woman is five foot three). But the results often meant that riders’ toes hit the front tire when turning, called toe overlap. Another complaint was the tall stand-over height, which compromised bike handling. The bigger wheels also lengthened bikes’ overall wheelbase, and some designers exacerbated that length by slackening the headtube to accommodate riders’ toes.” That made 29ers “feel like a bus to smaller riders,” explains Brock Webster, who owns Orange Peel Bicycle Service in Steamboat Springs, Colorado. Consequently, many bike companies simply didn’t make 29ers in a small or extra small, because they couldn’t preserve the handling characteristics without toe overlap at those frame sizes. Shorter women and teens enjoyed better performance from bikes built around 26- and 27.5-inch wheels.

More than a decade later, many cyclists still abide by that logic—although now it’s not always accurate. Over the years, bike manufacturers have evolved the 29er formula. Some of those innovations have made it possible to extend the fit and performance to accommodate four-foot-ten riders. That’s good news for short cyclists, because the larger wheels of a 29er offer compelling advantages. They can take more work to get rolling, but they also hold more speed, offer more traction, and smooth out rough terrain. Consequently, they’ve become the industry’s hottest commodity. “Three-quarters of all the bikes we sell now are 29ers, and that includes small frames,” says Webster. “Now we can sell 29ers to extra-small riders, and the bikes fit awesome and handle great.”

Click here to read the complete article on Outsideonline.com.