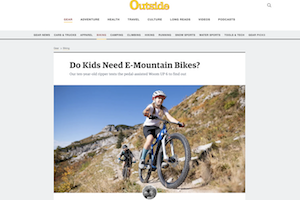 Rarely has a piece of test gear caused so much controversy in our household. Ski boots, bikes, fly rods, camp showers—all manner of gear lands on my doorstep for review, and my husband and ten-year-old daughter greet every item with curiosity. But unboxing the Woom UP 6 ($3,749), an e-mountain bike for kids, triggered emotions ranging from anger to elation.

My daughter, Simone, the bike’s intended tester, cooed over the gleaming blue finish on the UP’s aluminum frame, the 90-millimeter air fork, the Schwalbe Rocket Ron tires on 26-inch wheels, and the Fazua motor–battery unit that boosts pedal strokes with up to 250 watts of power.

My husband, Ben, was less enthusiastic. He hates it when speedier e-bikers buzz past us on paved bike paths and uphill stretches of singletrack around our home in Steamboat Springs, Colorado. “I don’t want her becoming one of those assholes,” he muttered.

Safety is another consideration. Commuter e-bikes have become increasingly popular among our local tweens and teens, who fit onto the smallest adult frames from companies such as Haibike, Pedego, and Trek. Fitted with panniers and racks, e-bikes let kids pedal themselves to lacrosse practice or violin lessons. But they’ve also elicited concern: Isn’t it dangerous to hand out motors to people with undeveloped prefrontal cortexes? Around Steamboat, it’s become common to see kids zooming their motorized cycles down the middle of the street or crowding several of their helmetless friends onto the handlebars and top tubes.

Now brands are starting to manufacture kids’ e-mountain bikes. Haibike makes the child-size Sduro HardFour ($2,710), with 24-inch wheels. Commencal sells the Meta HT 24 Power ($3,000). And this month, the Austrian kids brand Woom launched its e-mountain-bike models in the U.S. The UP 5 ($3,599) has 24-inch wheels and fits seven-to-eleven-year-olds; the UP 6 ($3,749) features 26-inch wheels and fits ten-to-fourteen-year-olds.

Despite our obvious apprehension, I was intrigued by the idea of an e-mountain bike for Simone. Her dad and I have always invested in top-quality kids’ bikes in an attempt to help our daughter love mountain biking as much as we do. Wanting to increase her chance of success on the trails and minimize any undue suffering, we’ve sought out the most lightweight builds (most kids’ bikes are way too heavy for them to pedal for any real distance) and we’ve insisted on models with geometries and components optimized for children’s proportions. Why not extend that continuum of optimization to e-mountain bikes, I reasoned, given their potential to boost my child’s pedaling power?

Click here to read the complete article on Outsideonline.com.