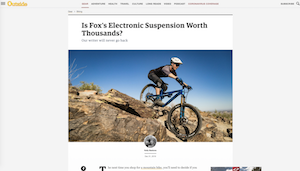 Is Fox’s Electronic Suspension Worth Thousands?
Our writer will never go back

The next time you shop for a mountain bike, you’ll need to decide if you want intelligent suspension that senses the terrain every three milliseconds and optimizes performance accordingly. Fox unveiled such magic in 2019 with its Live Valve system, which does what all mountain bikers say they want: it makes the bike feel awesome on every trail—and doesn’t even require the rider to flick a switch. But it’s not cheap.

When purchased as part of a component package on a new bike, the Live Valve costs around $2,000. As an aftermarket upgrade, which is only possible on a handful of existing bike models, the price is more like $3,200. That’s because the system includes a Live Valve–specific fork and shock as well as a small, computerized controller and battery unit that orchestrates split-second alterations to the suspension settings.

I wanted to see if the on-trail payoff was worth that kind of cash, and I was in a unique position to find out. When I bought my Pivot Mach 5.5 Carbon in 2018, the frame included mysterious ports and fittings for some unidentified part. Enlightenment came that August, when Fox unveiled the electronic Live Valve system that would fit there. Pivot was one of the first brands to adopt Live Valve, which also now graces bikes from Giant/Liv, Rocky Mountain, and Scott (with more expected to sign on, though Fox remains mum about just who yet). But because Fox’s system wasn’t quite ready for the public when the Mach 5.5 hit the market, my bike arrived without Live Valve, and I spent a year riding it with a normal Fox 36 fork and Float DPX2 shock.

To read the rest of the article, click here.