Chef Michael Beary heads to the Mexican state of Oaxaca to find–and revive–some of the world’s finest chiles.

When Michael Beary opened Zocalito, his Oaxacan restaurant in Aspen, Colorado, more than 15 years ago, he quickly found that many of the ingredients he needed weren’t available in the United States. Even in Mexico, some heritage chiles—such as the achilito, which once featured prominently in many Oaxacan salsas—were nearly impossible to find. “They had become so rare, even local chefs were using generic substitutes,” Beary said. So he started making trips to the remote Oaxacan valleys where the terroir lends these peppers their particular flavor. “My project is to get to the farmers, so I can pay them what the middleman would take,” said Beary, who hopes his purchasing power can convince growers to keep producing traditional peppers. He imports chiles and other Oaxacan items like chapulines (grasshoppers) for his restaurant; in 2012 he launched an online store (zocalito.com) that makes them available to both professionals and home cooks around the world.

1. Initially, I looked for rare chile varieties here, at the Mercado Abastos in the city of Oaxaca, and I still get some of my taviches there. But to find my best peppers, I had to work directly with farmers.

2. Felix Antonio Gomez (left) is one of only six growers who plant the chilhuacle—its name means “old chile” in the Nahuatl language of the Aztecs—in  the Cuicatlán district of Oaxaca. He has the best land and the best plants, which usually produce outstanding chiles. I’m interested in the larger ones you get from the third or fourth pickings, which have been left on the plant longer. After the chiles are harvested, Oaxacan growers often dry them in the sun, but at this altitude there’s heavy dew that doesn’t allow them to dry sufficiently. So I bought a $20,000 dehydrator and brought it to Oaxaca. Now we can dehydrate 2,000 pounds in 10 days. I dry them to a precise water-activity level, so no mold can grow.

3. Markets like this one near the Zócalo, the city’s central square, are quintessentially Oaxacan. One of my favorite things to buy in this area are the roasted chapulines in the Benito Juárez market, which are a popular snack. I always buy from Daniella Santiago Cruz, who’s got the freshest ones in Oaxaca. They’re typically sold in three flavors—garlic, lime, or chile pequin—but for mine, I have her combine all three flavors. We serve them on our guacamole, and people go nuts. 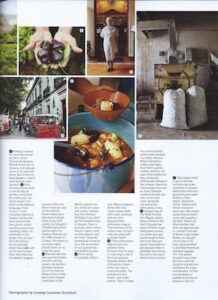 4. At his home in Cuicatlán, Felix’s wife, Mayra, prepares dishes like chile caldo, a soup made with meat, calabaza, and corn that features fresh chilhuacles negros. The freshness of the chiles is key, as it provides the soup with its bright flavor.

5. These chilhuacles negros enjoy the greatest fame, because they’re used in mole negro, one of the most popular Oaxacan dishes. Red chilhuacles, meanwhile, are used in mole coloradito. The yellows are less known, and really scarce. They’re made into mole amarillo, which I pool beneath my chiles rellenos. Mayra learned to make mole negro from Felix’s grandmother, and she still does it the traditional way, using only chilhuacles instead of the cheaper stand-ins most people now rely on. Even Oaxacan restaurants that say they serve mole negro generally use only a few chilhuacles, if any.

6. I always stay at the Hotel Parador San Miguel, where Nancy Galvez is the chef. I brought her some of Felix’s fresh chilhuacles amarillos. Dried ones are hard enough to find, but fresh ones are nearly impossible to get because they’re available only during harvest in the towns where they’re grown.

7. This molino (mill) is one of the few commercial-scale machines in Oaxaca, where the chiles are ground to your specifications. Corn, beans, chocolate, chiles—there’s a different molino for each one, with stones inside that are hand-cut to mill a particular food. There’s no other kitchen tool that can approximate it. I couldn’t find one of these in the United States, so I bought one on one of my trips, disassembled it, and flew it home as checked luggage. The TSA people thought I was crazy, but now I use it at Zocalito to grind corn and beans for sopes and tamales. I’m the only producer of powdered pasilla de Oaxaca in the U.S.