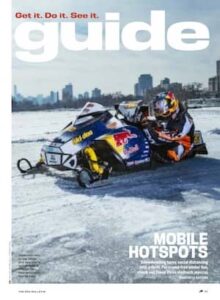 Let the rest of the U.S. worship cars: Northern Wisconsin swaps out steering wheels for handlebars come winter, when residents ride snowmobiles to stores and restaurants—and gas stations preserve snow around their pumps to offer drive-up service for sleds. “Snowmobiling has its own culture up there,” says Red Bull racer Gunnar Sterne, who honed his speedster skills on the Northwoods’ frozen lakes. “I’ve ridden a lot of places, but the Northwoods of Wisconsin has the best trail riding anywhere,” he attests. Some 1,600 miles of marked routes thread through birch forests and atop cliffs bordering Lake Superior, and junction signs indicate mileage to nearby pit stops. “You can visit three or four towns in one day,” says Sterne, meaning that a platter of fried lake fish is never far away. Neither is the lake-effect powder that buries Michigan’s Upper Peninsula, a 30-minute snowmobile ride from Boulder Junction. Michigan’s snowy hills challenge experienced riders, while Wisconsin’s flatter (but twisty) trails and open lakes appeal to all skill levels. And everyone converges on Eagle River, WI, (dubbed the “snowmobile capital of the world”) for races at Derby Complex, a snow track that hosts the sport’s top oval and snocross races—including the World Championships in mid-January.

Stay Cozy into leather sofas warmed by a stone fireplace at Boulder Junction’s Acorn Lodge, located amidst Main Street eateries and Northwoods trails (you can ride from the hotel). Or, cocoon into a lakeside cabin at Black Bear Lodge in St. Germain, which sits amidst the Bo-Boen network and its 100 miles of groomed trails. Eat After a fire last summer burned down the taxidermy-filled Gooch’s A-1 Bar & Grill in Boulder Junction, the owners rebuilt snowmobilers’ de facto clubhouse and continue to serve the regulation fish fry and breaded chicken wings. In Land O’ Lakes, a diehard powder rider runs Bent’s Camp Bar and Restaurant, serving the region’s tastiest hand-tossed pizzas in a birch- paneled lodge built in 1906. Here, Wisconsin cheese curds come with a side of house-made marinara.
Drink Don’t miss the flavored beers at Eagle River’s Tribute Brewing Company: Its White Legs Jalapeno Wheat Ale won brewing’s most prestigious gold medal, and its Blueberry Train Wheat Ale integrates notes of the region’s candy-sweet wild fruit. For a slow- start-Sunday, roll into George’s Pub in Boulder Junction for a late-morning Bloody Mary bar that includes Wisconsin’s own Arty’s Bold Bloody mixer.
Guide Have your own sled? You’ll need separate trail passes for Wisconsin and Michigan. Boulder Marine Center in Boulder Junction rents snowmobiles. In St. Germain, Adventure North rents sleds and offers guided tours through snow-laden pines and open lakes.

KENNEBEC VALLEY, MAINE
Rugged, 4,000-foot peaks border the shining Kennebec River and the tributary streams that tumble through Maine’s fragrant evergreens, and that mash-up makes for some of the most diverse winter scenery in the East. “There’s such a variety of riding,” says Russell Walters, a whitewater paddler and snowsports enthusiast who co- founded Kennebec River Brewery. Snowmobiles can circumnavigate venerable Bigelow Mountain on an 18- mile loop, or cross the Kennebec on a suspension bridge built specifically for sleds. A groomed trail (Maine’s highest) climbs to 3,717-foot Coburn Mountain, “And on a clear day, the views across Maine’s western mountains are amazing,” claims Walters. Another bucket-list destination is Grand Falls, a spectacular 40- foot waterfall that forms a 100-foot crescent across the Dead River. All are accessible via Maine’s sprawling Interconnected Trail System (ITS),which is facilitated by private landowners who’ve given snowmobiles the right- of-way. Many trails hug picturesque rivers and streams, or lakes where riders can free-form their lines. From The Forks, where the Kennebec meets the Dead, snowmobiles can log daylong loops in every direction, making this is an ideal base camp. Or, ride the ITS from town to town, staying in a new lodge each night.

Stay Northern Outdoors, at The Forks, offers everything riders need: cabin rentals, hot tub, foosball—even a microbrewery. In Eustis, Tea Pond Lodge and Cabins bunks guests in peeled-log luxury with outdoor fireplaces, Shipyard on tap and cauliflower crust pizza.
Eat “People travel 60 miles for our burgers,” says Walters, because the hand-shaped patties of locally-raised Pineland Farms beef are just that good. Day-tripping to Greenville should include homemade meatloaf (try it in the grilled cheese sandwich) or lobster mac and cheese at the StressFree Moose. In Monson, follow a cup of Spring Creek’s BBQ pork with hommade carrot cake or blueberry-ginger cake— skipping dessert here is wicked foolish.
Drink Gulp a Sledhead Red or Magic Hole IPA at Kennebec River Brewery at The Forks. In Bingham, hit up Patrick’s Pub for Allagash, Bigelow and other Maine brews on tap.
Guide 201 Power Sports rents snowmobiles and related gear from locations in Bingham and Jackman, and through Northern Outdoors at the Forks. Guides are also available.

NORTH LAKE TAHOE, CALIFORNIA
“The views here blow you away,” raves Travis Alley, a Truckee-based golf pro who winters as a Polaris ambassador and snowmobile influencer (@tahoesledhead). Combine Sierra granite with prodigious snow (800 inches was the recent high mark) and panoramas over a blazing blue Lake Tahoe, says Alley, and you get “One of the prettiest places in the world—and I’ve ridden just about everywhere.” You don’t need to be an expert to plug into the scene. Many beginner- friendly routes serve up the region’s signature vistas, particularly around Brockway Summit and its powder meadows. Experienced riders with their own sleds and avalanche training will find “the most epic backcountry riding there is,” promises Alley. Those playground features include wind lips and cornices, pillow lines, powder fields and vast cirques for high-marking. “And unlike a lot of places, which require a 20-mile road commute to get to the fun stuff, the great riding around here is often right out of the parking lot,” Alley adds. And between the town of Truckee and North Tahoe hamlets like Kings Beach, refueling stations for body and machine are always within striking distance.

Stay Cedar Glen Lodge in Kings Beach makes it tough to choose between the cabins (with fireplaces and kitchens) and lodge rooms (killer Lake Tahoe views). Fortunately, both options can include jet baths to soothe ride-weary muscles. Meanwhile, Cedar House Sport Hotel in Truckee caters to mountain athletes who like stylish sustainability and German down comforters.
Eat Alley says that Golden Rotisserie in Truckee makes the best grab-n-go burrito, hands-down. Nod for best burger goes to The Char Pit, a Kings Beach institution since 1962.
Drink Everything at Alibi Ale Works (with public houses in Truckee and Incline—from quirky sours to the English-style porter—start as Lake Tahoe water. In Truckee, the majestic Bar of America began life as the train depot, but the cocktails are on point and in the moment.
Guide Eagle Ridge Snowmobile Tours combine trail-riding on groomed snow with opportunities to veer off-route and try your hand at carving powder turns in wide- open terrain.