Aspen throws a party for its unsung master of Bauhaus architecture and design. 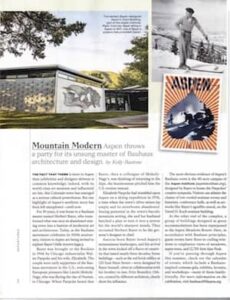 The fact that there is more to Aspen than celebrities and designer skiwear is common knowledge; indeed, with its world-class art museum and influential art fair, this Colorado town has emerged as a serious cultural powerhouse. But one highlight of Aspen’s aesthetic story has been left unexplored—until now.

For 30 years, it was home to a Bauhaus master named Herbert Bayer, who transformed what was once an abandoned mining town into a bastion of modernist art and architecture. Today, as the Bauhaus movement celebrates its 100th anniversary, visitors to Aspen are being invited to explore Bayer’s unique legacy.

Bayer was brought to the Rockies in 1946 by Chicago industrialist Walter Paepcke and his wife, Elizabeth. The couple were early supporters of the U.S. Bauhaus movement, welcoming European pioneers like Walter Gropius and László Moholy-Nagy, who were fleeing the rise of Nazism, to Chicago and New York. When Paepcke heard that Bayer, then a colleague of Moholy-Nagy’s, was thinking of returning to the Alps, the businessman pitched him the U.S. version instead.

Elizabeth Paepcke had stumbled upon Aspen on a skiing expedition in 1938, a time when the town’s silver mines lay empty and its storefronts abandoned. Seeing potential in the town’s bucolic mountain setting, she and her husband hatched a plan to turn it into a retreat for the world’s sharpest minds. They recruited Herbert Bayer to be the getaway’s designer in chief.

Austria-born Bayer loved Aspen’s mountainous landscapes, and his arrival in the town kicked off a flurry of creativity that lasted nearly three decades. Some buildings—such as the red brick edifice at 120 East Main Street—were designed by Bayer himself, often in collaboration with his brother-in-law, Fritz Benedict. Others, created by different architects, clearly show his influence.

The most obvious evidence of Aspen’s Bauhaus roots is the 40-acre campus of the Aspen Institute (aspeninstitute.org), designed by Bayer to house Paepcke’s creative symposia. Visitors can admire the cluster of low-roofed seminar rooms and futuristic conference halls, as well as artworks like Bayer’s sgraffito mural, on the David H. Koch seminar building.

At the other end of the complex, a group of buildings designed as guest accommodations has been repurposed as the Aspen Meadows Resort. Here, in accordance with Bauhaus principles, guest rooms have floor-to-ceiling windows to emphasize views of meadows, aspen trees, and the summit of Ajax Peak.

If you’re passing through Aspen this summer, check out the calendar of Bauhaus-inspired costume balls, exhibits, lectures, and workshops—many of them family-friendly. For more information on the “Bauhaus 100: Aspen” celebration, visit bauhaus100aspen.org.