I’ve eaten bivalves in France, on the Chesapeake Bay, along Florida’s Gulf Coast, and in trendy Seattle oyster bars where I’ve blown my meager paychecks on the ephemeral pleasures of Washington Kumamotos and Quilcenes. During those moments, an oyster’s raw, creamy brine is the only sensation I know, and it’s bigger than mere food: It’s the entirety of the ocean in my mouth. Once it dissipates, I’ll open my wallet to the wind just to feel it again. 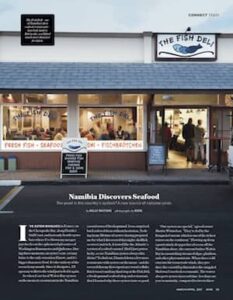 So when I saw local Walvis Bay oysters on the menu at a restaurant in the Namibian coastal town of Swakopmund, I was surprised, but I ordered them without hesitation. Nothing in my lifetime of oyster chasing prepared me for what I discovered that night: shellfish so sweet and rich, it tasted like the Atlantic’s version of a salted caramel. Had I just gotten lucky, or are Namibian oysters always this divine? To find out, I hunted down a few more restaurants with oysters on the menu—and discovered that my first experience wasn’t a fluke. But it wasn’t until my final stop at the Fish Deli, a Swakopmund seafood shop and restaurant, that I learned why these oysters taste so good.

“Our oysters are special,” agreed owner Martin Wittneben. “They’re fed by the Benguela Current, which is one of the richest waters on the continent.” Flowing up from a particularly deep pocket of ocean off the Namibian shore, the current bathes Walvis Bay in a nourishing stream of algae, plankton, and other phytonutrients. When those cold currents hit warm trade winds, they produce the coastal fog that makes the snaggled Skeleton Coast look so romantic. The waters also grow oysters in record time (less than one year to maturity, compared to two to three years elsewhere). That makes Walvis Bay oysters incomparably tender—the veal of shellfish. “Oysters are just like any other meat; they toughen as they age,” he explained.

Oysters aren’t native to Namibia, but in the late 1980s, a few innovators began to experiment with farming them. One of them, a Spanish expat named Manuel Romero, even developed a hatchery to spawn oyster larvae. This eliminated the need to import starters from Chile—and created an oyster industry that is 100 percent Namibian. Soon there were oyster farms all along the coast, from Walvis Bay to Lüderitz in the south, feeding a new demand, especially in China, one of the first countries to import Namibian oysters. 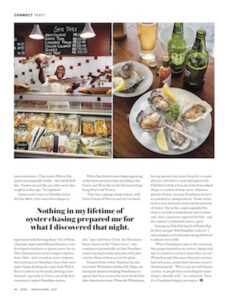 Walvis Bay bivalves soon began appearing on the nest menus in Asia, including at the Oyster and Wine Bar in the Sheraton Hong Kong Hotel and Towers.

“They have a plump, meaty texture, with hints of mineral flavors and not too much salt,” says chef Oscar Chow, the Sheraton’s buyer (known as the “Oyster Guru”), who continues to periodically include Namibian oysters among his daily selection of 25-plus varieties own in from across the globe.

Demand from within Namibia has also increased. Wittneben and his wife, Katja, are among the pioneers helping Namibians recognize that their ocean is far more fertile than their deserts ever were. When the Wittnebens, having operated an oyster farm for a couple of years, switched to retail and opened the Fish Deli in 2008, it was one of the first seafood shops in a nation of meat eaters. Business started off slow, because Namibians weren’t accustomed to eating seafood. (Game meats, such as oryx and kudu, tend to be the proteins of choice.) But as the couple expanded the shop to include a smokehouse and a restaurant, their customers’ appetite for fish—and the country’s celebrated oysters—grew.

During my Fish Deli lunch of Walvis Bay bivalves and pan-fried kingklip (cusk eel), I noticed platters of iced oysters being delivered to almost every table.

“When Namibians come to the coast now, they gorge themselves on oysters, almost making it a contest to see how many they can eat,” Wittneben said. But more than just vacationland delicacies, oysters have become a source of national pride. “We’re a not-so-well-known country, so people here are looking for some- thing to identify with,” he continued. “Now, it’s a Namibian thing to eat oysters.”