Snoozy no more, Steamboat’s base area is rekindling its playful spirit with a new coaster and nightlife—plus big plans for the future. 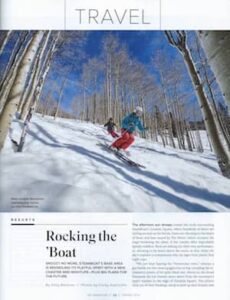 The afternoon sun droops toward the roofs surrounding Steamboat’s Gondola Square, where hundreds of skiers are milling around on the bricks. Some are churning to the blasts of brass and bass issued by The Motet, which occupies the stage bordering the plaza. A few lumber after improbably speedy toddlers. Most are belting out their own performances, shouting to be heard above the music as they relate the day’s exploits to companions who sip lager from plastic Bud Light cups.

“We just kept lapping the Twistercane trees,” whoops a guy beside me who wears goggles but no hat, revealing the exclamation points of his spiky black hair. Above us, the broad Stampede ski run funnels more skiers from the mountain’s upper reaches to the edge of Gondola Square. The joiners click out of their bindings, stoop to pick up their boards, and shuffle to the back of the line extending from the beer tent.

Today’s combination of warm sun and cold powder would stoke the party impulse in skiers everywhere, so at many resorts, a mass groove-in to live music wouldn’t seem out of the ordinary. Steamboat, however, has lately suffered from a shortage of playrooms. The fact that skiers here are actually sticking around after the lifts stop spinning suggests that this family-courting resort is recapturing some if its free-wheeling spirit.

Yes, back in the day, Steamboat’s base area was a pretty raucous place after dark. When I moved here in 2002, you didn’t have to stumble far from the slopes to find an all-night party. The Inferno—a basement nightclub and notorious trigger of misdeeds located 100 feet from the gondola entrance—had just closed, but Levelz and The Tugboat carried forth the torch with their live bands and inhibition-free zones. Each night at 2 am, when those bars kicked everyone out into the icy mountain air, some of the evictees still wore ski boots.

Levelz was shuttered after a herd of move-busters threatened to splinter the second-story dance floor. The Tugboat, Dos Amigos, and a number of other base-area icons fell victim to the economic recession that began in 2007. Downtown Steamboat Springs, four miles down valley, maintained a lively club and restaurant scene. But Steamboat’s base area entered the board-game era, when there was little to do after dark but stay in and play Jenga.

Lately, though, the mountain seems to be waking from its slumber. Steamboat started offering night skiing in 2014, and although the number of lighted runs isn’t huge (essentially two routes down, plus a terrain park) it’s returned some much-needed life to the base area. Now, local hucksters come to lap the terrain park, and families meet up for a few runs after work.

This year’s opening of the Outlaw Mountain Coaster builds on that momentum. From its boarding zone just above Gondola Square, the coaster winds across the ski area for 6,280 linear feet, making it the longest in North America.

Like most major changes to established resorts, the Outlaw has its detractors. (“What an eyesore!” is one common complaint.) But even the Eeyores can’t deny its fun factor: Maximum speed is 25 miles per hour, which feels more like 60 on the track’s abrupt curves. On most weekends, the Outlaw stays open till 8:30, and gives fun-seekers a compelling reason to hang out at the base area through the after-dinner hours.

Plus, the change in resort ownership that took place this past summer has everyone feeling optimistic about the overall energy ahead. In April 2017, Intrawest announced that it would sell Steamboat to affiliates from Aspen Skiing Company and Denver-based KSL Capital Partners. Most locals are hopeful that this buyer’s deep pockets (and deep commitment to skiing) can return the rest of Steamboat’s missing mojo.

“We have a great opportunity to turn that base area into a place where you want to stop and dwell,” says David Perry, the President and Chief Operating Officer of the yet-unnamed purchasing company. He says that recent investments at the base area—like this year’s renovations to the Sheraton Steamboat Resort, located slopeside at Gondola Square—have helped to spark some buzz at the base. “We just want to make sure that celebratory energy is maintained and enhanced, maybe by creating places for people-watching, or by helping the après scene to continue a little longer into the evening,” Perry says.

“What we don’t want to do is homogenize it,” he adds. “Steamboat has an authentic history, and has been true to its own pioneer roots, which gives it a very different feel than a purpose-built resort.”

Beyond its cowboy character, Steamboat’s ski terrain is also unique—and it remains as alluring as ever. With no zones above treeline, the mountain looks stubby by Rocky Mountain Standards, but it rises a full 3,668 feet above the valley floor and catches copious amounts of powder. Earlier that day, I’d floated among ghostlike aspens whose limbs were plastered in snow. These weren’t mettle-testing missions, but carefree runs on forgiving pitches that let me savor silent turns beneath a canopy of blue and white. That aestheticism, rather than extreme adventure, is what earns devotees to this place. I’m one of them.

What’s changed is that when I now buy a drink on the mountain, I may actually receive something that isn’t tired, but inspired. Before The Motet show, to celebrate my friend Susie’s birthday, we’d bellied up to Thunderhead Red’s at the top of the gondola, then ogled what can only be described as a masterpiece of a Bloody Mary, a full meal with bacon, a veggie kebab, and a hard-boiled egg. The bartender smiled at my surprise. “We started a Bloody Mary contest this year between all the resort bars, which really made everyone up their game,” she explained.

I can feel this upswing even in Gondola Square, where The Motet dashes away amidst cheers and applause. “Where to now?” asks Susie. It’s five o’clock, when most base-area bars start putting up chairs. There’s still no juke-joint for late-night dancing (we’d have to head downtown for that) but there is the new BrauHaus and its pretzels and sausages and 40-plus taps. We shoulder our skis and walk there. We may not end up wearing our ski boots till bedtime, but at least we’ll keep them stomping after dark.