24 bars, pubs, nightclubs, and publicans that give our ski villages their distinctive flavors and buzz 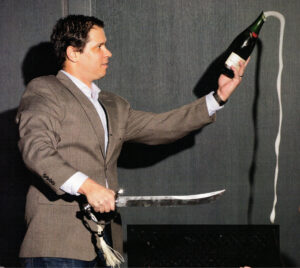 “Don’t bother with churches, government buildings, or city squares,” Ernest Hemingway, that most prolific of drinkers, once opined. “If you want to know about a culture, spend a night in its bars.” That sage advice applies equally to the culture of a ski resort., where the only title that holds more clout than bootfitter is bartender. From brunch to last call, these places, faces, drinks and dishes fuel the high-octane day- and nightlife of Vail and Beaver Creek, defining and expanding the unique experience of village life.

Drinking In History
Pepi’s Bar: the Heart of Bridge Street
Popping into this 54-year-old landmark pub plugs you into one of Vail’s greatest hits, past and present. On the time-burnished wood-paneled walls hang dozens of photos signed by decades’ worth of dignitaries, including astronauts like Buzz Aldrin and former US president Gerald Ford (who took ski lessons from Pepi and stayed at the inn upstairs before he became commander in chief; Pepiu and his wife Sheika still call it home). There’s also downhiller Lindsey vonn, grinning and gorgeous, and Pepi Gramshammer himself, young and dashing and skiing bare-headed as he bashes gates in th3 1953 Giant Slalom race in Innsbruck, his historic first podium finish that led to a berth on the Austrian Ski Team. Gaze at rows of his silver ski trophies, displayed in a glass case near the entrance. Then hoist your own prize: A gleaming half-liter glass stein filled with Paulaner pils. The heady aroma of sausage and sauerkraut may prompt you to order the same while you listen to Andy Cyphert and other local acts strum through after-ski staples (“Brown-Eyed Girl” or “Margaritaville,” anyone? Solo shows play at après and dinnertime). On warm spring days when the newly remodeled bar’s articulated wall of windows opens the room up to Bridge Street, you can almost feel the pulse of Vail Village thrumming through the floorboards.

Shot of the Alps
Root & Flower: Wall Street’s Alpine Wine Bar
This shoebox-size bar claims to sell the most génépy in the United States. Don’t know what génépy is? You’ll learn that—and much more—from a staff of beverage nerds who cater to experimental drinkers. Génépy des Alpes (an herbal liqueur similar to absinthe that hails from—you guessed it!—the European Alps) is the house shot here, and bartenders love it so much they concocted génépy “caviar” that adds a silky/chewy texture to your grassy elixir, turning it into a French-style boba tea. Start there, then move on to the delightfully overthought wine list, which is divided into categories such as “jam & spice” and “underappreciated & misunderstood.” On Tuesdays, co-owner Jeremy Campbell (an Advanced Sommelier) emcees a blind tasting for the bar’s informal wine club: Members bring bottles of intriguing wines and challenge one another to guess its varietals, location, and the year it was produced. But while geekery abounds, snobbery does not: For every $60 glass of Barolo, there’s an $8 gem, and cocktails hardly get the brush-off. If esoteric rums and Spanish sherries quicken your pulse, this is your paradise.

On-Mountain Oasis
The 10th Lounge: A Respite From Plastic Boots
It’s hard to match the grandeur of the mountain vistas surrounding Mid-Vail, but The 10th pulls it off. First stop is the coatroom and its picture windows framing the Gore Range sawing into the eastern skyline. Hang your jacket and helmet on custom-made metal hooks depicting a pair of crossed skis stamped with the “10th,” celebrating the Tenth Mountain Division soldiers who trained at nearby Camp Hale before World War II, and returned after the Armistice to found the resort. Then trade your ski boots for fleecy slippers and pad into the high-ceilinged lounge, which compensates for its lack of mountain panoramas with opulent touches: The bar is a $1.5 million slab of Indonesian onyx, the burger is made of succulent Wagyu beef, a two-story wine rack behind the bar displays Grand Cru Burgundies and rare California Cabernets–and there’s Veuve Cliquot by the glass. Order that, or one of the cocktails (which favor a fruity, citrus-spiked flavor palette) and rest your slippered feet on the stone hearth by the fire. Truly, there is no comparison.

Click here to read the rest of the article, with photography.