The High Lonesome Ranch in western Colorado is big enough to be a national park, but its owners, led by Paul Vahldiek Jr., don’t take their cues from the government. Instead, they’ve developed a unique approach to land management that could revolutionize the conservation movement for both private and public open spaces. 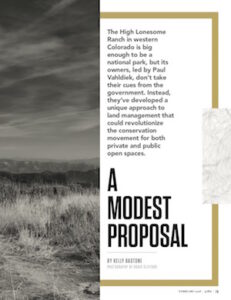 The field looks dry and lifeless except for a few mule deer grazing at the edge, where tufts of yellow grasses tickle the cliffy toe of Cow Mountain. The dogs know better, though. Both of them—a pointer and a Labrador retriever—zip frantically through the clumps of straw, sniffing out the pheasant and chukar hiding there. Paul Vahldiek JR. walks behind them with a shotgun slung casually over his shoulder, African-style.

Vahldiek knows about Africa, having hunted many of that continent’s notable species, including the antelope, which is quick and elusive. Vahldiek’s shot proved sure. Now, at 62, adrenaline-flooded pursuits no longer call to him; these days, he prefers subtler hobbies, like casting for Bahamian bonefish. His fishing buddies include newscaster Tom Brokaw, rock musician Huey Lewis, and Yvon Chouinard, who founded the Patagonia clothing company.

On this unseasonably warm November day, I’m wing shooting with Vahldiek at the High Lonesome Ranch, his 260,000-acre property not far from De Beque, Colorado, which is 35 miles or so northeast of Grand Junction. (The land constitutes approximately 35,000 acres of deeded land and about 225,000 acres of permitted land.)Vahldiek doesn’t much care if he kills any birds when he’s hunting. “It’s more about the people you’re with, and the dogs, and the scenery,” he says, glancing at the surrounding mesas. The low, late autumn sun has turned the clay cliffs amber and brought the piñons and junipers into sharp focus, so every needle looks distinct. Herds of elk and deer roam these hillsides, and 10-pound trout swim in the North Dry Fork and its beaver ponds. “You have more bear and eagle here than in my entire country,” a European friend told Vahldiek. After the conversation, he purchased two oil paintings, which now hang in High Lonesome’s dining hall. One depicts a bear; the other, an eagle. To foreigners, and even to many Coloradans who are already accustomed to the Rockies’ wide-open spaces, Vahldiek’s property looks as if it’s a rare swath of virgin territory, one that offers a glimpse into what the West was like before it was sliced by highways and boxed into housing developments.

These are not exactly untouched lands—some portions have been homesteaded and grazed for more than 100 years—but they’re largely undeveloped. And they’re vast: Encompassing more than 400 square miles, the High Lonesome Ranch extends from the desert washes near Highline State Park to Douglas firs atop 9,000-foot Middle Mountain to the beaver ponds of the North Dry Fork valley where we’re hunting. Touring the entire property takes three days by jeep. If these private lands were deeded to the U.S. Department of the Interior as a national park, they would become America’s 27th largest unit—ranking right behind Rocky Mountain National Park in size.

Like our national parks, the High Lonesome Ranch is open to the public. In summer, families occupy its guest cabins, ride horses, cast for trout, and eat extravagant meals. But unlike our prized parks, it’s also a working cattle ranch that sanctions hunting and energy development—uses that make High Lonesome look more like Bureau of Land Management (BLM) property than acreage under the purview of the National Park Service (NPS).

Vahldiek, however, doesn’t want his private property to be like BLM lands or national parks. He believes he can do better. Gazing across the valley, which is but one small parcel of Vahldiek’s land, I’m startled when a flutter of red and indigo feathers takes flight in front of me and rises into the sky like an untethered balloon. I snug my gun against my shoulder and cheek, shoot, and miss. Vahldiek’s pointer looks at me quizzically. In his world, the firing of a gun is always followed by a retrieve.

The bird then veers toward Vahldiek, who takes aim. It’s a 50-yard shot—barely within a shotgun’s range—but still, he drops the pheasant. Vahldiek doesn’t celebrate; he’s not surprised. He’s used to hitting everything in his sights.

Click here to read the rest of the article on 5280.com