This article was a finalist for a 2016 Maggie Award for Best Feature. 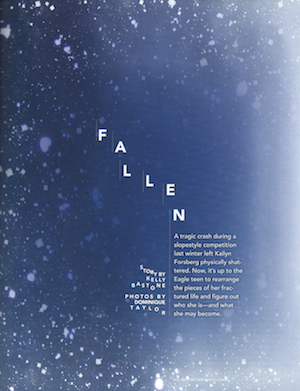 A tragic crash during a slopestyle competition last winter left Kailyn Forsberg physically shattered. Now, it’s up to the Eagle teen to rearrange the pieces of her fractured life and figure out who she is—and what she may become.

At dawn on April 7, the time of day when most Copper Mountain regulars hit the snooze button instead of venturing out into the brittle cold, Kailyn Forsberg stood at the top of Copper’s slopestyle course, blazing with excitement. The 15-year-old Eagle freeskier had won silver medals in the preceding days’ halfpipe and rail events at the USA Snowboard and Freeski Association’s national competition; today’s contest was slopestyle, her favorite of the three, and she was gunning for gold.

Few doubted that Forsberg, a physical prodigy in a valley overpopulated with gifted young athletes, would be able to claim it. She had learned to walk at a precocious nine months, and she started skiing four months after that. Wielding a golf club by age two, she sent balls soaring 75 yards. She played football alongside the boys through seventh grade, stoically enduring their extra-hard hits and eventually earning the respect of her teammates and their fathers. Then she switched to girls’ lacrosse, for which she played defense “like a ninja,” says her Eagle Valley High School coach Stephanie Renzelman. Interceptions were her specialty, and during scrimmages with the coaches she handily outmaneuvered her elders with her long, go-go-Gadget arms and an uncanny ability to predict the ball’s trajectory.

In 2010, when Forsberg joined Ski and Snowboard Club Vail, she impressed her coaches with a dogged determination to master advanced aerials. “Most kids can picture the big event, but they’re not willing to lay the groundwork with fundamental skills,” says SSCV freeskiing coach Bob Sonntag. Forsberg, however, logged long hours on the trampoline, honed the basics on smaller jumps, and braved the big stunts seemingly without fear. The day she landed her first big-league 360 in the Golden Peak terrain park at Vail was a highlight of Sonntag’s coaching career. “She just nailed it,” he recalls.

Forsberg never talked about making it to the X Games or the Olympics—but in truth, she rarely chatted about much of anything in public save for an occasional extemporaneous outburst of dry, sarcastic wit. (Her 11-year-old sister, Kiara, was always the loquacious one, though she didn’t care for sports.) Sometimes her taciturn nature could be painful to watch: during her first nationally televised sports interview at age nine, Forsberg grunted one-word answers into the microphone. But her physical feats displayed a precocious athletic vocabulary that got her noticed as one of freeskiing’s most promising up-and-comers. After two years in SSCV’s weekend program, she enrolled at Vail Ski and Snowboard Academy, a Minturn public school that organizes its curriculum and schedule around snow-sports training and competition.

But midway through last winter, Forsberg abruptly left the academy for closer-to-home Eagle Valley High. Since she now lacked an official coach to oversee training and shepherd her through races, her father, Gypsum Elementary School principal Mitchell Forsberg, navigated the maze of registration requirements and got her to the starting gates.

At Copper Mountain on the night before the slopestyle competition, race officials at the coaches’ meeting had discussed the likelihood of icy morning conditions. After a sunny spring afternoon, overnight temperatures had plummeted to well below freezing, which hardened the snow and made the features fast and unforgiving. But Forsberg had no representative at that meeting, and as she queued up for her second practice lap on the morning of April 7, without a dedicated coach, she received no cautions about the course, had no last-minute admonitions about dialing things back accordingly, and was not asked whether she was wearing spine protection.

Feeling sparky and confident, Forsberg bulleted toward the first jump, popped off the top, and hurled her skis skyward.

Back flips may be the most underrated tricks in the freeskier’s arsenal. To spectators, corkscrews and other off-axis stunts appear to be riskier, when in fact they are less so, offering avenues for escape since it’s possible to make a relatively safe side landing. Not so with back flips, which provide few bailout moves when skiers over-rotate and keep spinning past the landing, as Forsberg did that fateful morning.

She fell to earth as kinetically as Yvain in Stardust, smashing into snow as hard as asphalt. The blow pulverized the seventh cervical vertebra in her neck, and although Forsberg remained conscious after her crash, she couldn’t feel or move her legs. Her family never saw the accident (her father had been riding the chairlift; her mother and sister had been walking to the start), but they watched, horrified, as rescuers strapped her onto a ski patrol sled then loaded her onto a Flight for Life helicopter that airlifted her to Denver.

Physicians at Children’s Hospital Colorado repaired her fractured pelvis and dislocated hip and did what they could about her broken neck. Thirteen days later, when she was transferred to Craig Hospital in Englewood, she’d already regained some feeling in her back. But her initial goal at the rehabilitation facility wasn’t focused on her legs: it was to restore the full use of her arms. As a C7 tetraplegic facing the rest of her years confined to a wheelchair, she was going to need them. Even more daunting was the prospect of mobility: ultimately this grounded fly girl had to figure out where she wanted to go.

Click here for the rest of the article and accompanying photography by Dominique Taylor.